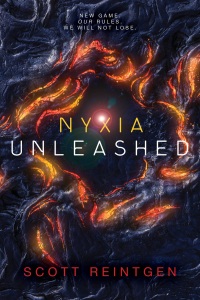 Getting to Eden brought Emmett and his crewmates one step closer to their promised fortune. But surviving Eden may be the biggest reward of all. Discover book in the trilogy Marie Lu called, “a high-octane thriller.”

Emmett Atwater thought Babel’s game sounded easy. Get points. Get paid. Go home. But it didn’t take long for him to learn that Babel’s competition was full of broken promises, none darker or more damaging than the last one.
Now Emmett and the rest of the Genesis survivors must rally and forge their own path through a new world. Their mission from Babel is simple: extract nyxia, the most valuable material in the universe, and play nice with the indigenous Adamite population.
But Emmett and the others quickly realize they are caught between two powerful forces—Babel and the Adamites—with clashing desires. Will the Genesis team make it out alive before it’s too late?

One great part of this book tour is a tour-wide giveaway where 3 people will win a finished copy of Nyxia Unleashed, US Only.

Thanks to Rockstar Book Tours and Crown Books for Young Readers for a copy of the book to be a part of their amazing tour for Nyxia Unleashed.

If you haven’t read Nyxia, I HIGHLY recommend it. I also reviewed it last year, here. After reading the first book back in November, I needed the next one immediately. Reintgen knows how to write a cliffhanger and he does them WELL. I have so many emotions about the first one and I could talk about it forever, but I digress. The second book, Nyxia Unleashed, is just as great, just as action-packed, just as moving, just as heartbreaking, and just as much a cliffhanger as the first one. This book destroyed me. It was exactly what I hoped for in continuing the series and Reintgen didn’t disappoint.

The premise of Nyxia Unleashed is that it follows Emmett Atwater’s journey working for Babel Communications. A fictional company that intends on mining the substance Nyxia which has developed into a tool that Babel solely owns and distributes. In Nyxia, Babel picked teenagers who were broken, poor, and in need of something that could drastically change their futures and offered them fortunes, fame, and the chance to roam the stars until they reached Eden, the planet where the nyxia is made, to work. On the way there, the teens are put through many challenges and tests to strengthen them and to help them develop skills that they’ll need once they’re on the ground. But the catch is that not all of them will make it down to the ground. Where we find Emmett at the start of this book is right after he launches to head down to the surface. Once he lands, the action starts. The Adamites are helpful, welcoming and keeping secrets. The control stations on the ground and Babel are hiding things and keeping secrets. The Tower station in space is planning things and keeping secrets. The mining grounds are dangerous. The conflicts abound, the resolutions are few, but the cliffhangers are many and it all concludes in a way that you can’t even imagine. But you’ll want to keep reading because you’ll need to know what happens next.

Reintgen has created and developed such a unique world in Eden. The Adamites or the Imago’s are the natives and we get to meet a few, how they live, see some of their customs. The animals described are things out of dreams, or nightmares, depending on your perspective. One thing that I loved was the development that we got to see of the teenagers growing knowledge of the Imago’s culture and customs. Too many times we get to see the culture and customs of others and disregard them because they’re different from our own. The beauty of each and every single one of us is that we ARE different. To celebrate those differences and understand where others are coming from is something we all should hold on to and this book, from the beginning, did that. Not only is the cast so diverse already, but it brings in a completely other foreign culture and we get to see how that translates. I LOVE that about this series.

Another thing that I love about this book is the character development that we get to see. We see character relationships growing from the first book. There are characters that wouldn’t think would become favorites, but they do! There are characters that you may hate, but you can understand their reasoning for acting in the way they do. I’m trying to do this in a way that isn’t spoilery, but… Y’all. The character development is high-key one of the best I’ve ever read. And I’m not saying that because I love this series. It’s because Reitgen has taken the liberty and made these character super relatable and some of the most conscious characters I’ve seen.

Again, I really loved the incorporation of biblical themes throughout the book. Maybe, I’m overreaching again, but Babel Communications, ships named Genesis, a planet that was referenced to as Eden, people referred to as the Adamites, said people’s self-referenced as Imago, etc. I grew up in church, backed by a Christian belief, attended a Christian university, and currently work for a Christian organization. For me, this book was, again, really refreshing because it used things and terms that I had prior knowledge of. It also continued to play on the idea and integration of the Tower of Babel.

**BUT. This is in no way a Christian book or a book specifically for Christians. I feel the need to write this because even though it has Christian themes and references, it is not Christian Fiction. It is Science Fiction, pure and simple. And that is why I love it.**

This book was a fantastic addition to the Nyxia Triad. I cannot stress enough how great this book and this series is. It is a fast-paced, relentless heck of an emotional tornado that will leave you wanting more. The twists and turns throughout make it unpredictable and an attention-grabber. Reintgen has once again written something that I hated to put down or finish. I wanted more. Check this series out. You definitely won’t regret it.

Scott Reintgen was always a back-row dreamer. As early as kindergarten, teachers noticed his tendency to stare out of classroom windows and disappear to more interesting elsewheres. In high school, he began laboring away on the opening chapter of his first fantasy novel. One of his favorite English teachers agreed to read the pages and the very next day she switched him (illegally) out of Spanish and into a Creative writing class. The story got tossed eventually, but he never lost the confidence he was given by that single act of empowering faith.

Convinced he would one day be a writer, Scott spent most of college and graduate school investing in the world of literature. This eventually led to a career in teaching English and Creative Writing in North Carolina. He strongly believes that every student who steps into his classroom has the right to see themselves, vibrant and victorious and on the page. It’s his hope to encourage a future full of diverse writers. As he’s fond of reminding his students, “You have a story to tell and you’re the only one who can tell it.”

As for his own writing, Scott continues to follow in the footsteps of his favorite authors. It was Tolkien who once wrote, “The fairy gold (too often) turns to withered leaves when it brought away. All I can ask is that you, knowing all these things, will receive my withered leaves, as a token at least that my hand once held a little of the gold.” And Scott hopes his books are a trail of withered leaves that might lead readers to the bright elsewheres through which he constantly finds himself wandering.

He currently lives in North Carolina with his wife, Katie, and family.

If you’d like to follow along with the rest of the book tour for Nyxia Unleashed the links to each are below.